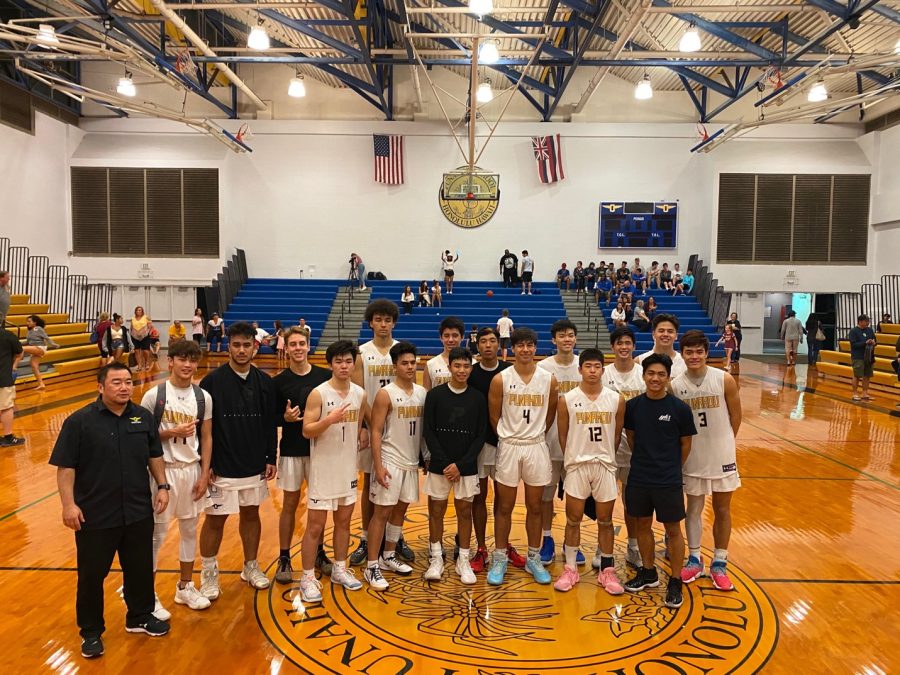 Due to the ongoing effects of the Coronavirus, the future of the 2020-2021 Punahou basketball season is uncertain. With all the uncertainty players have found ways to work independently as they wait for further announcements from officials and athletic heads.

For many players, access to gyms and facilities was hard to come by this summer. Players were able to go to places like 24 Hour Fitness, but due to recent shutdowns, they had to find new ways to stay in shape.

Players ran through driveways and neighborhoods, shot hoops in their backyards, and used weights they had laying around the house. Many of them are doing whatever it takes to stay in shape.

As far as basketball, not many players were able to get in live games. “I haven’t been playing in leagues, I’ve just been training. I’m just trying to distance myself from other people because of this whole situation,” stated Ryder Hsiung ’21, who is a starter on Punahou’s D1 team.

“I was going to join a club team until Covid-19 came and cancelled the league. So, I haven’t really been able to play much basketball besides practicing my shot a couple days a week,” said Paul Dempsey ’21 who planned to start on Punahou’s D2 team.

With regards to all the tournament cancellations, Troske ‘21 stated, “As a basketball player it was hard for me to have to take a step back and think of the bigger picture. The safety of our population and my family trumps that of my basketball career.”

Hsiung ‘21 is one of the only players trying to play basketball in college, which is why this situation has been especially tough for him. “For me, I want to play college basketball so senior season is the one shot to sort of prove myself,” he said.

Due to the cancelled mainland tournaments, and the restricted traveling, it’s hard for scouts to see players play. If this upcoming season is also canceled, many colleges may feel unfamiliar with players like Hsiung ‘21 and may hesitate to offer him a scholarship, or a spot on their team.

Concerning the upcoming school season, many basketball players feel like they’ve been left in the dark, not knowing when and how long the season will be. This is especially tough for seniors to process, since this may be their last year of competitive basketball.

“I feel like that’s the most important year, and I really hope we have a season. I want to go out with a bang, and play with my teammates one last time,” said Hsiung ‘21.

“If it happens, I’m feeling good about it,” said Dempsey ‘21. “I feel like during this quarantine I’ve peaked physically so I’m ready for the season, but I’m prepared for it not to happen. If we are able to go to school with no problem, then I’m okay with any type of season, shortened or full. But I don’t think it’s worth it to risk having another spike in cases just for the season.”

Many players are hopeful that the season will happen, but much like Dempsey ’21 are concerned about the health of the students and the well-being of the people on Oahu.

“I wouldn’t be concerned if the season is canceled. To me, it’s all about safety. This whole Covid-19 situation has held us back in so many ways as a society that I just feel that basketball is not a priority for me,” said Troske ‘21.

An announcement should come in the upcoming months, and the decision will depend on the state of the virus on Oahu.