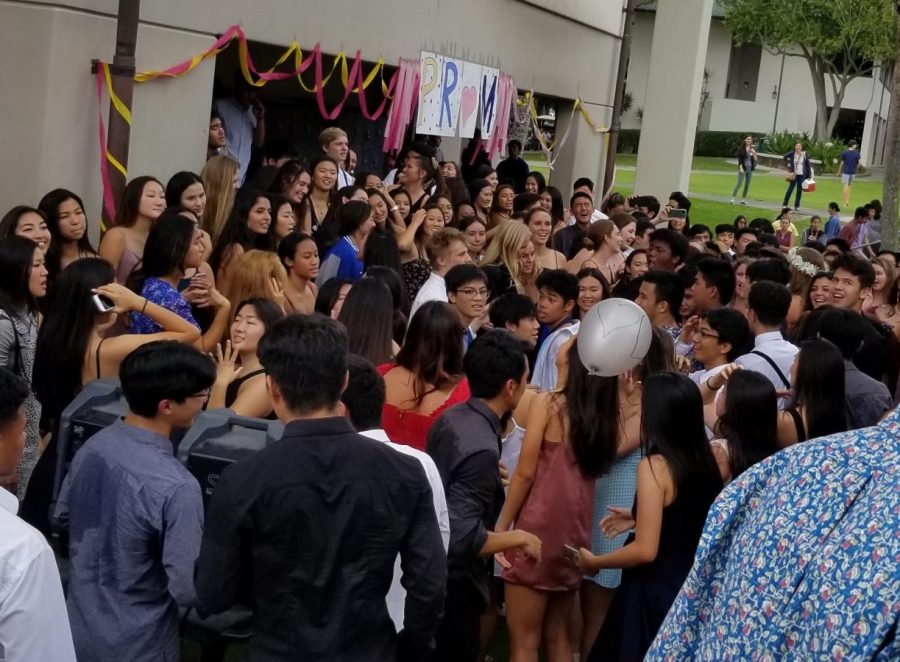 Senior Class ImPROMptu on the day before spring break

Imagine being born in the shadows after the horrid events of the 9/11 terrorist attacks, or growing up in an age when your world was starting to deteriorate due to climate change.  Imagine enduring a moment when you thought your life would end because of an incoming missile, and lived through a pandemic that has affected everyone and everything in its path. Well that someone is me and my classmates, whose high school careers have come to an abrupt and unforeseen ending, due to the Covid-19 pandemic.

On Thursday, April 16, 2020 at around 8:20p.m. A dagger was thrust into the hearts of every Punahou Senior, as Dr. Latham broke the news that the annual commencement ceremony for Punahou Seniors had been canceled. My classmates and I had been preparing for the worst at that point, as we all figured that our ImPROMptu prom was probably the final time that we’d ever see each other or ever step foot on campus ever again. However, actually hearing the words come from Dr. Latham’s mouth that our commencement was cancelled and that it would be held virtually instead, broke the hearts of myself and many of my classmates.

That was one of the worst nights I’ve experienced in a long time. Commencement was supposed to be a time of celebration with my classmates, friends, and family for the tremendous sacrifice and work we put in during our time at Punahou. More importantly, it was supposed to be a moment that we as a class shared together one last time before we went our separate ways into the future. However, all of that is now just a distant dream, and we may never know how that moment would have truly felt like.

Before the fate of our commencement ceremony was revealed, other graduation committees like Baccalaureate and Senior Chapel, had been planning to go virtual. I am part of the Senior Chapel Committee and we were preparing for the possibility for a virtual senior chapel before we went off for spring break. A lot of work went into that planning process, and I have been busy the last few weeks helping to prepare for it, but after the news broke that our commencement would also be held virtually , I shared a common empty feeling with many of my classmates who thought “who cares at this point already?”

Our motivation to finish the year strong plummeted, many of us even pondered if showing up to (online) school the next day was even worth it anymore. We all just wanted everything to end so that we could move on with our lives already. Emma Lalau shared that her “motivation to do anything school related [was] very low.” When asked if she planned on still attending the end of the year virtual events, she said “I’m trying to keep my head up and keep moving forward because there’s nothing I can do about it at the moment, it sucks, but I just don’t care at this point, thus I don’t know if I’m planning on joining the virtual events.”

I too, like Emma, thought “who cares already?” Had I not been on one of the graduation committees, I would probably have skipped the virtual events too. However, since I am on the graduation committee, I’m here to tell you all that it’s still worth it to attend. Yes, I know, all of you just want to get your diploma and move on with life already. We’re all upset and feel hopeless from what has happened to us recently, but don’t let that affect the way you connect with your classmates one last time.

I get that doing it virtually sucks, but you and me both know that there’s nothing we can do about it. Leah Miyaki, another Punahou senior stated, “It’s honestly hard to want to participate in virtual events.” However, she also stated that she will participate in some events as even though it’s not the same; it’s still a “compromise of what we lost.”

Mrs. Kunishige, Dylen and Rachel and the senior chapel committee members: Jackson, Anela, Jaycee, Piper, Chloe, Luke, and worked extremely hard to put together a chapel that could remind you of all the good times we’ve had together here in our time at Punahou. As a committee, we did our best to create a program that could help you to heal and forget what we are going through right now, even if it just for a few minutes. This pandemic has ruined our Senior year as we know it, but I promise that attending these virtual events will help lessen the pain a little and bring us closer as a class one final time.

To the class of 2020, I know that this isn’t how we envisioned our Punahou careers ending, and that we wish we had just one more chance to see each other in person again. But I know that you all will do well and will have a successful and bright future.