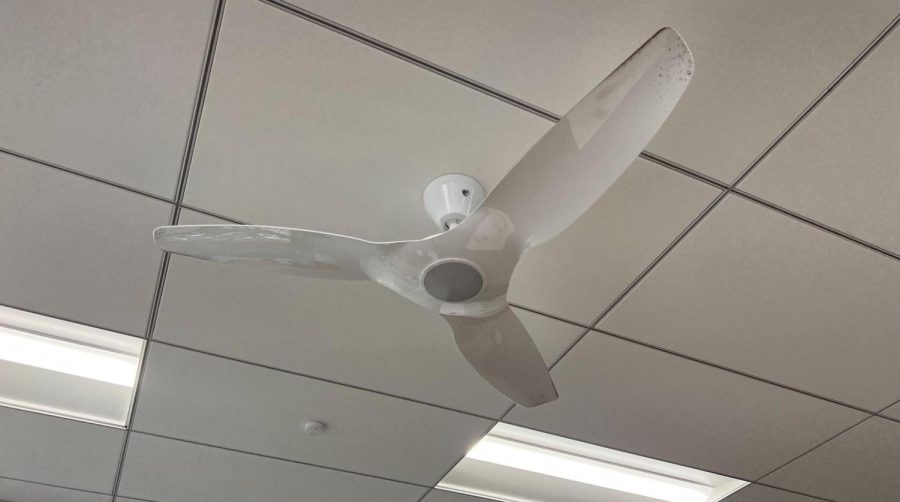 In Punahou’s ongoing Net Zero Project, the school is coming together to achieve 100% on-campus renewable energy.

Net Zero, in broad terms, refers to the state of equal amounts of carbon dioxide being emitted and removed. It is part of the greater climate action taking place around the world. It can either be achieved through removing carbon dioxide from the atmosphere – or, in Punahou’s case, reducing and eventually eliminating emission of carbon dioxide through renewable energy production.
Road to Green Energy
Mr. Sunny Donenfeld, VP and treasurer of Punahou School, says that Energy Conservation Measures (ECMs) will help the school reach its goal.

The most important ECM by far is the installation of solar panels, which is ongoing. In addition, Tesla batteries were built on campus to store any extra energy produced.

“So let’s say the sun rises at 6, and students don’t really show up until 7:30. There’s not much electricity being used, we’re storing energy.” This is due to variable electricity rates, which mean the price of electricity is determined by fluctuating market prices: electricity may be more expensive in certain times of the day than others. When the price goes up, Punahou can use the stored electricity. “So we’re not only saving energy, … we’re also saving money for the school. So it’s actually kind of a clever project.” said Mr. Donenfeld.

The second most pressing ECM is installing LEDs in place of the current light fixtures. LED lights are brighter, last longer, and are more environment friendly. They are known to produce light up to 90% more efficiently than traditional incandescent lights.

Another ECM is increasing the classroom temperature set point to 78°F (about 25.6°C) from the current 72°F (about 22.2°C). Punahou is also upgrading outdated chiller units with newer models which are more efficient and environment-friendly.

“I don’t know if you’ve ever gone into a room and it’s freezing. I certainly have, and … no one should be freezing! You know if you’re freezing it’s wasting energy.” exclaimed Mr. Donenfeld.

In the Academy, this means looking at the infrastructure and airflow of certain buildings. Newer parts of the campus, like Kosasa, were designed with built-in fans, while some older buildings have no fans at all. Even if it is the same increase in temperature, the change would feel more uncomfortable in the latter.
COVID-19 and Net Zero
The coronavirus pandemic has been a major challenge to the project. During early stages of in-person learning, the doors to many classrooms were left open to prevent the transmission of the virus through surface contact. This meant that the air conditioners could not function as effectively as when the windows and doors were closed. However, with greater understanding of the virus, the project is returning to plan.

“Now that so many people are vaccinated, now that we know that transmission really happens face-to-face, without masks, we’re getting back on track in terms of energy savings.” explained Mr. Donenfeld.

Another concern was the amount of waste generated at the cafeteria. When you order lunch or buy snacks from the snack bar, the food you receive often comes in plastic containers and with utensils made of non-renewable materials.

“That’s something we really have to look at. Can we do more farm-to-table, with food?”
The Human Factor
Mr. Donenfeld points out that the project requires “human willingness to change.”

“I would say, the most important factor going forward is just going to be behaviors.” Even small actions, like turning off the lights and shutting off faucets when they’re not in use, can help the community reach the goal.

Some ECMs may have little direct and immediate impact on students and staff. However, this is not the case for changes like default temperature increase. People can easily feel the effects of change in temperature, even if it is by a small amount. A foreseeable challenge is that different people can have different preferences when it comes to temperature. A study even claims that sex may play a role in what temperature a person can be more productive in, with women performing better at higher temperatures.

“And so, how do you find that ideal point where people say, ‘ok, we’re not wasting energy, and we can all be productive?’ … The behavioral aspects and that people are different is going to be a small challenge, but every day we’re going to get a little bit further in terms of saving energy, and hopefully together we can all make it happen.”
Where do Students fit in?
The net zero project may seem unrelated to the student body, but Mr. Donenfeld says it is far from it.

“I’ve worked in higher-ed for 25 years … in my experience, students push the administrations to do the things we ought to do. They are more in-tact with what’s new and what’s happening,” He said. The new generation is more sensitive to climate issues, and catalyzes change.

“We wouldn’t be funding a net zero project if there wasn’t an institutional will to invest.”
Going Forward
Mr. Donenfeld explains that currently, Punahou is a leader in terms of climate action. However, he stresses that, “what’s really important is that we don’t just assume … that we’re automatically gonna be considered the leader. I think we have to stay cutting-edge. It’s not automatic that our ideas are the best.” He says that it is necessary that the community stays vigilant and on the lookout for new ideas.

With each climate report more devastating than the last, reversing the damaging effects of the modern lifestyle seems impossible, especially under careless governments. When asked about the matter, Mr. Donenfeld answered, “It’s a funny question because I immediately think about voting. Do you think your vote will make a difference if you’re voting in an election?” If everyone believed their actions to be meaningless, there would be no change at all. By setting an example, Punahou could inspire others to take climate action.