Punahou Has Introduced Sheep to Rocky Hill. Here’s Why. 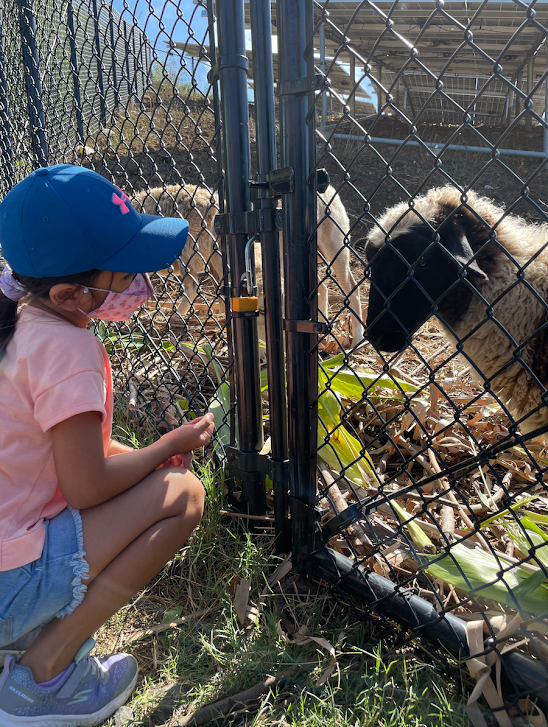 In Spring of 2021, four sheep were introduced to Rocky Hill as an addition to Punahou’s Net-zero Initiative project. The sheep play a vital role in clearing the vegetation around the PV Panels on Rocky Hill.

With temperatures rising every day, climate change has been a concern of the school for many years. In the push to preserve our natural environment, Punahou has adopted the goal of producing 100% of its own energy on campus.

According to Dr. Emily McCarren, the academy principal, all of the appliances that keep the school running, such as the lights, air conditioning, and water supply, are almost completely powered by on-campus PV panels and batteries. The goal of complete energy sustainability is completely within our reach, she says.

But in order for these appliances to circulate energy throughout the school, they have to be constantly kept in good condition – this is where the sheep come in. According to Kumu Andy, one of the heads of the Outdoor Education department, the main purpose of the sheep is to maintain the vegetation around the PV Panels on Rocky Hill, ensuring maximum exposure to sunlight.

Compared to other options, which would involve the emission of excess carbon, sheep are the perfect, sustainable solution. At one point, goats were also being considered, but in the end, it was decided that sheep would be a better fit due to some of their own traits and goats’ potential interest in jumping on the panels

According to Kumu Andy, to say that the sheep have been effective would be an understatement. Within the first month of being introduced, they munched through almost all of the plants that once completely covered the overgrown panels. Some of the Haole Koa (their main source of food) grows back from time to time, but their current diet is now heavily reliant on the care of the Outdoor Education crew, who feed them hay, fruit, leftover vegetable waste, and more. Various classes, teachers, and members of grounds also visit frequently to provide both food and attention.

When the first two sheep were brought to campus, a mother and daughter, they were extremely timid, and lacked much of an appetite. However, when the second duo came in, a more friendly mother and son, the first pair quickly gained more confidence and were encouraged to eat more.

“It’s pretty neat to see the distinct personalities between the four of them.” says Kumu Andy. “The more outgoing sheep are very similar to big dogs. They really love attention, snacks, and lots of scratches.”

“While the first mother and daughter are still pretty skittish, they are definitely getting braver and more comfortable around us,” says Kumu Shelby, another member of the Outdoor Education department. “We are slowly earning their trust.”

Although many students and faculty might not be aware of the sheep, anyone who might want to get involved can feel free to contact Kumu Andy and Kumu Shelby, and they will be happy to set something up.

“We love to see how excited the kids get when they see the sheep,” Kumu Andy says. “It’s important for students at such a young age to see how animals should be treated. They aren’t our pets, our relationship is symbiotic. We really just want them to be the happiest sheep ever, and we hope the kids see that.”