Perspective: How the 2021 Track and Field Season Played Out 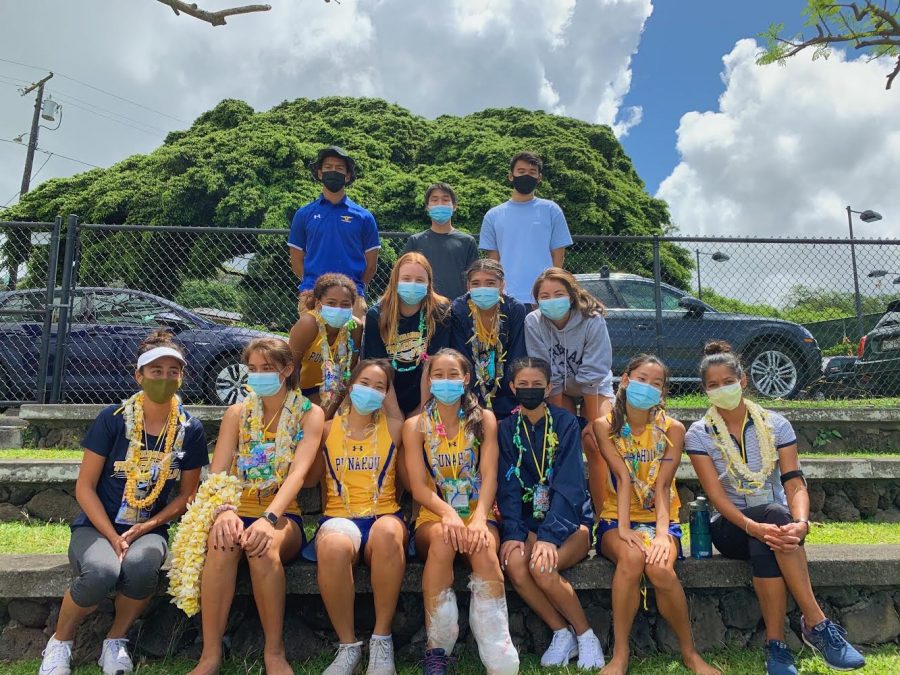 The 2021 Track and Field Season was a blast! Aside from having to wear masks while running 4-400s, at the end it was all worth it. After hearing that family and friends weren’t allowed to watch the meet in person, I thought meets would be silent and awkward. But I was wrong. Our teammates cheered us on and gave us powerful pep-talks before we raced.I reached out to a few athletes to ask how their season went.

Senior Hurdler Lexie Jackson ‘21 says, “Track went a lot better than I expected it to go. Despite having to wear masks, it didn’t stop our team from gaining new runners and becoming just as close as we would’ve any other year.”

Jordan Furuta ‘22 runs both 1500m and 3000m meaning he runs respectively four and eight laps around the track. He says,”Running in circles isn’t the easiest thing to do as it’s mentally and physically tiring, especially during a race when the stakes are high. It’s hard to keep pushing, to stay on pace, hit your time and make sure you’re not going too slow or fast.” This definitely seems like a stressful process. He adds,”I can speak for all of us on the team getting through every single time because of our amazing coaches (Todd Goode, Todd Iacovelli, Dominic Piro) and our teammates around us that we can count on to be cheering our names every single lap.”

Chris Paige ‘21 took the win in all his events he participated in. Despite being injured with a sprained ankle, he was still able to break the 110m hurdle ILH record with a whooping 14.48 seconds, get personal best in the 300m hurdle, and win the 4*400 relay along with James Fujita, Ethan Gerhardt, and Noah Tonai. He stated, ”Although it wasn’t how I planned my last season as a Punahou athlete, I am glad I was able to complete one last time with all of my teammates and friends. I had a great time wearing the Punahou uniform and was grateful for all the opportunities it gave. I wouldn’t have wanted the season to end any other way.”

Celia Kong-Johnson ‘21 was bummed that there were no states this year, but cherished the moments with her teammates. She says,” The meets were really different because the number of schools at each meet was restricted to a certain number and spectators were not allowed, which was actually pretty disappointing because that’s one of the most fun parts about track. However, we still had our team to support us and yell for us during the meets and the fact that we were all going through this crazy weird track season together made it so much fun at meets.” She also adds that she is grateful for this season to even happen and to get close with people she never mingled with before.

After a gnarly fall during the 110m hurdle race, Kaoi Blaisdell-Higa ‘23 was able to PR by three seconds after a week of recovery at champs. He says,”I was basically thinking about recovery, visualizing the race and seeing what I did wrong. During the race, I was focusing on my steps.”

Mahealani Monteilh-Zoller, coach for the girls and boys hurdle team, agrees with many that the pandemic brought unprecedented changes to how everything in our daily lives operated. She says,”The changes were big: no preseason weight room/technique development, a condensed season, dual meets, alternating lane assignments and lastly, masking-up during workouts and competitions. We were returning from a 2020 season that was cut short. Therefore, despite these challenges, our team overcame these “hurdles” as true hurdlers do and reported to practice with gratitude in our hearts and always made the best of our less-than optimal conditions.” She concludes by stating, “My Punahou Hurdle 2021 team has shown tremendous perseverance and will be an example to my future teams of how goals are accomplished even under the most undesirable conditions. As we reflect upon the impacts of the pandemic on our world, we have many to thank, behind the scenes, for providing us the opportunity to return to the track to do what we enjoy doing.”

Duncan Macdonald, head girls coach, admits that the seniors didn’t get the season they deserved however, they did very well. He is very optimistic for the future of the team for many reasons. He says,” First, we don’t lose many seniors. This was a quality but small group. Second, we have a tremendously talented group in this year’s 9th, 10th and 11th graders. In addition, we will hopefully get back some athletes that were committed to other sports during this abnormal season.” He concludes by stating our team should be terrific, assuming a relatively normal season next year.

Even though this season was unlike any other, we all trained hard and gave our best in the limited meets given. The girls took 1st and the boys took 2nd in the ILH Championship. I’m grateful for our amazing coaches and can’t wait for what’s to come next year!